Psychology as a scientific discipline has primarily modeled its methods after the highly successful achievements of classical physics, thereby longing for the acceptance as a “hard” empirical science – this has been termed “physics envy” (Fish, 2000). The following case illustrates an example which contradicts this view on the history of science.

The evolution of the complementarity meme

Photograph of Niels Bohr and Edgar Rubin as members of the club “Ekliptika” (Royal Library of Denmark).

The idea of complementarity fundamentally transformed physics. One of the crucial points Bohr emphasised concerned “the impossibility of any sharp separation between the behaviour of atomic objects and the interaction with the measuring instruments which serve to define the conditions under which the phenomena appear” (Bohr, 1961).
In a theme issue of the journal DIALECTICA edited by Wolfgang Pauli and published in 1948 compiles various seminal papers on complementarity by eminent physicists. Bohr also contributed an article to this special issue entitled “On the notions of causality and complementarity” (Bohr, 1948) in which he discusses the dialectic complementarity mode of description and the impossibility to objectively separate “between behaviour of the atomic objects and their interaction with the measuring instruments defining the conditions under which the phenomena appear” (Bohr, 1948, p.312). Interestingly, Bohr was a cousin of the famous Danish psychologist Edgar Rubin who is famous for his eponymous Rubin’s Vase (E. Rubin, 1915).

This ambiguous visual stimulus is today still widely used in research on bistable perception in psychology and neuroscience (e.g., Hasson, Hendler, Bashat, & Malach, 2001; Qiu et al., 2009; X. Wang et al., 2017). Interestingly from a history of science point of view, it was Rubin who introduced Bohr to the concept of complementarity. Both were members of the club “Ekliptika”. Rubin in turn adopted the idea from the writings of the late William James who wrote about complementarity in Chapter 8 in his timeless classic “Principles of Psychology” (James, 1890b).

When Bohr received the prestigious Danish “Order of the Elephant” (a distinction normally reserved for royalty) he emphasised the importance of the complementarity principle. Bohr choose to wear the ancient Chinese Yin & Yang symbol ☯ on his coat of arms together with the Latin slogan “Contraria sunt complementa” (opposites are complementary), see Figure 6. The resemblance between the Yin and Yang symbol and the ambiguous figures studied by Rubin is remarkable. Moreover, various interdisciplinary scholars maintain that nonduality between mind and matter (psyche vs. physis, percipient vs. perceived, observer vs. observed, inner vs. outer, etc. pp.) fundamental pillar of Advaita Vedānta, Mahayana/Madhyamaka Buddhism, and Neo-Platonism (e.g., Plotinus), inter alia. 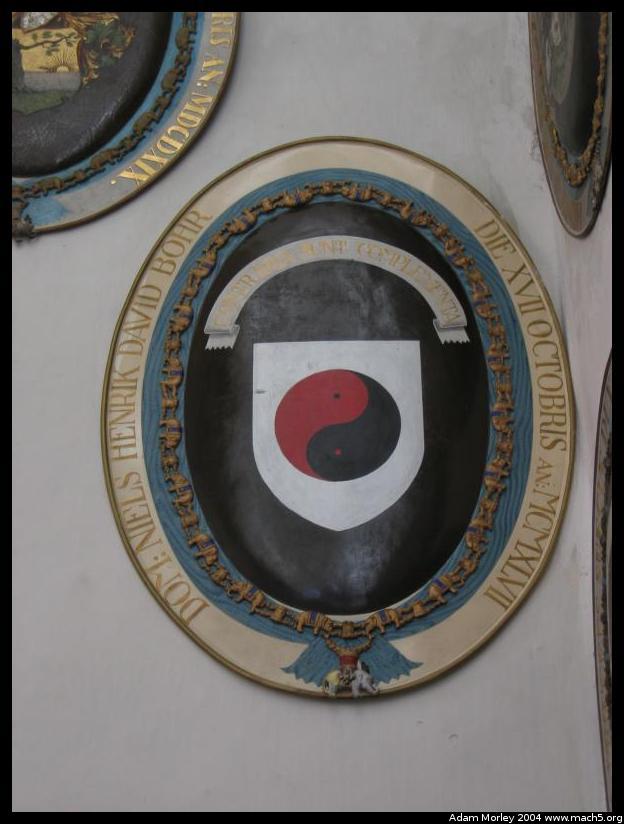